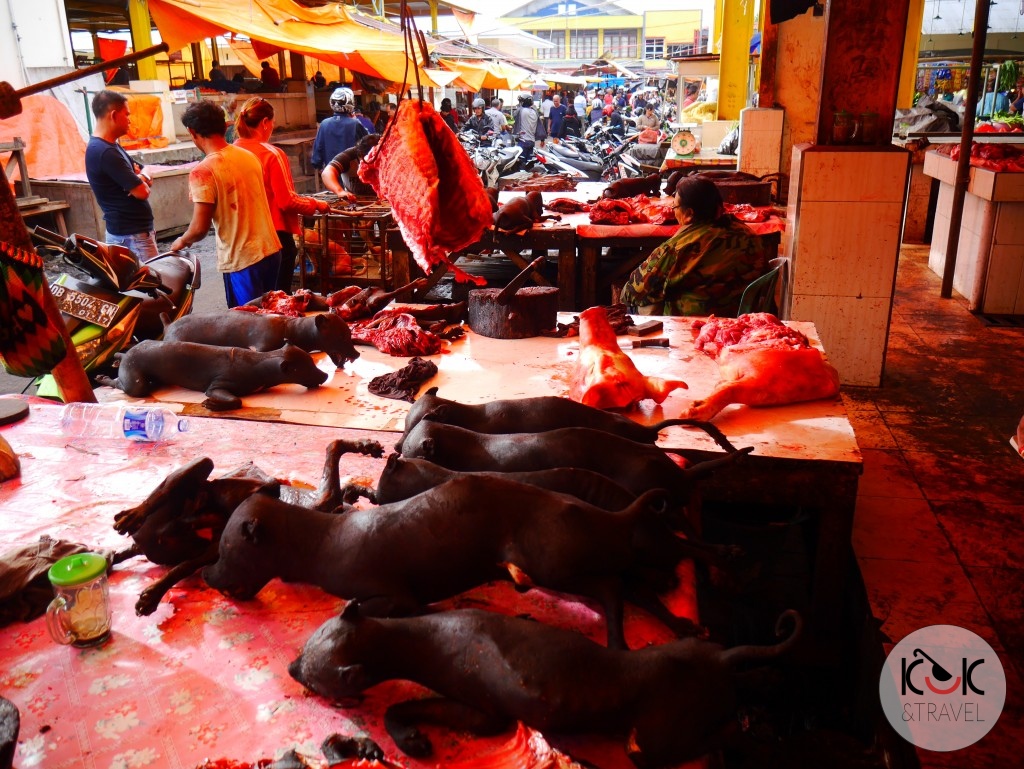 Travelling usually provides us with many positive emotions and experiences, especially when we get to know different and interesting cultures and extremely friendly people. This time we are in North Sulawesi, an Indonesian Island, near Manado, Tomohon and Tondano, a region originally inhabited by the ethnic group of people called ‘Minahasa’, and even though we are dealing with really friendly people here (you can say even: ‘’much more friendly than ever before’’ ), their eating habits and culture can scare off many Europeans, Americans or Australians. At first glance, everything seemed normal from our perspective, there are lots of Christian churches prevailing over mosques; besides, you can buy here stronger alcohol such as vodka, whiskey, which was impossible to get in Lombok (a typically Muslim Island); local people rejoice when they see a white man in the street as it’s a rare view for them, they will accost you and start a small talk and it doesn’t matter they don’t speak English, and the atmosphere seems so pleasant and relaxing until … you visit Pasar Tomohon (a local market in Tomohon) and get to know the true reality and tastes of these people .. In addition to the standard food in any local market such as: vegetables, fruits, fish, you will also see dog, monkey or bat meat. There will be rats and pythons on the stalls and you will come across cats and dogs locked in cages, which in a few hours are going for slaughter … and it takes place there in the market on the eyes of other people, as if it was nothing extraordinary. Sharing with you more details regarding this harrowing subject below, but please… note that this is not an entry for everyone as some of the pictures are really drastic. 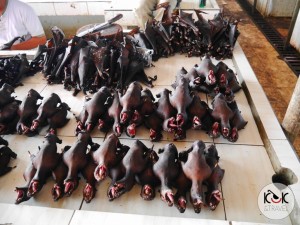 To get to Pasar Tomohon we had to wake up before 6 o’clock. We got there on a motorbike at 7. The market varied in products. As we entered the area it seemed amazingly colorful, there were lots of vegetables and fruit, the place was so big that we could not see the end of the stalls. 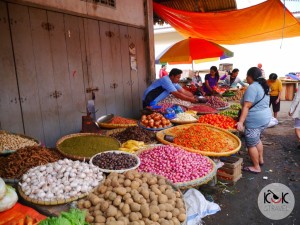 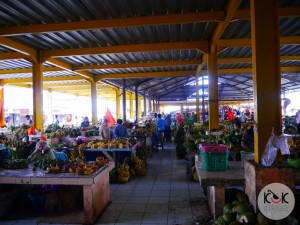 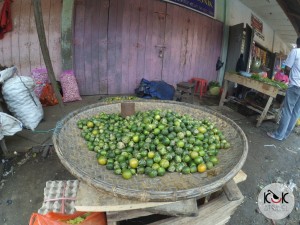 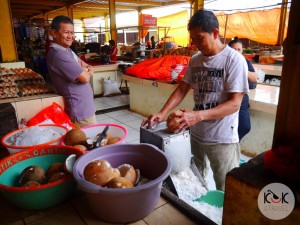 Then we continued to the right and got to stalls with meat and fish (BTW this part of the market is called Extreme Market), and here we stopped for a moment as what we saw there horrified us to the full. First, we came across the whole dogs or rather the whole dog meat lying on the stalls, their skin was black as immediately after hanging them their bodies were being put under the flame and then they could be displayed for sale.. We saw protruding teeth from dogs’ mouth with their faces showing suffering, and there were also parts of their body cut off like legs, chest; and then you reached the guy chopping the same meat. 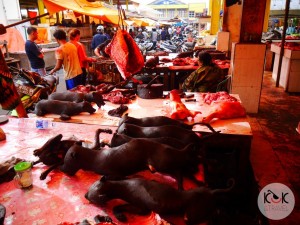 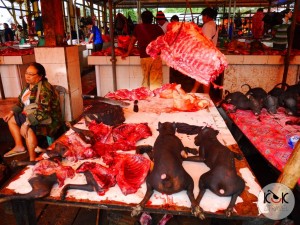 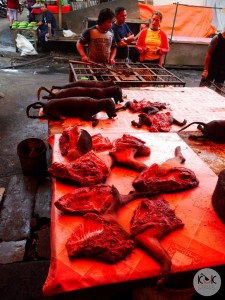 It seemed that there was nothing worse that we could see on that day, but right next to the meat on the stalls there were living dogs and cats in cages, bruised, with wounds on their heads, frightened, huddled, conscious of what was going to happen to them on the same day in the same place. We saw one man carrying a stick with a loop of string, which he put around one dog’s neck (after selecting the animal from the cage), then tried to pull it out of the cage, the dog was trying to defend himself. This view was terrible, we decided to move away from the spot but when we had to come back the same way to reach our motorbike the dog was already dead hanging on the stick:/ : 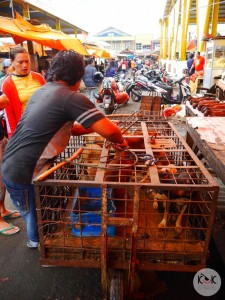 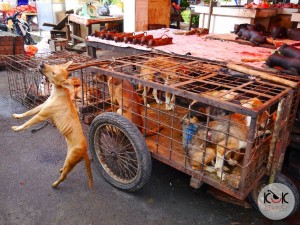 Stating that Minahasan people literally eat everything that moves is the most appropriate. We didn’t see monkey meat being sold (which they also eat), but there were many stalls with bats, python meat, rats, and of course with the meat popular anywhere in the world: pigs or chicken. 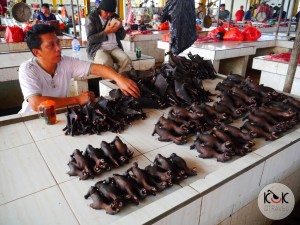 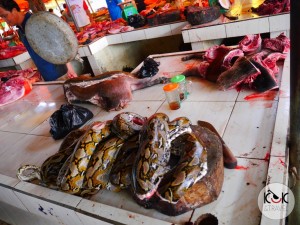 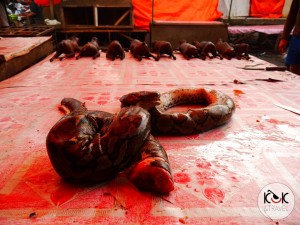 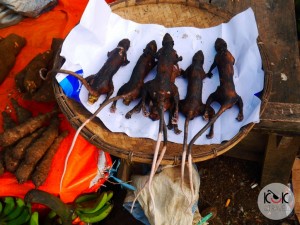 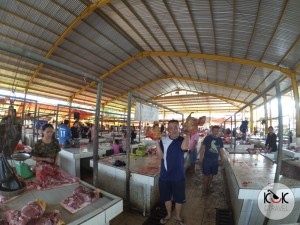 It should be added that eating a dog or bat is as common in Manado as eating chicken or pork in our country (excluding Muslims living there who don’t eat many animals). Manado non-Muslim people eat dogs every day. Besides, in the Manado or Tomohon there are lots of restaurants, serving RW / Rintek Wuuk which is nothing but a dish made of dog meat. When can you be 100% sure that no one in a bar or resto would pass you a dog on the plate? Eat vegetarian dishes or fish or eat at bars run by Muslims – yes! The local Christians, who should be more closer to us in a cultural and nutritional sense inflict such harm to animals, mutilate them in the most cruel manner … It is true that the local people know that white people do not eat dogs, but in order to be on the safe side in this respect, choose wisely bars and restaurants that you come across. There is also a different name in North Sulawesi for the popular American ‘hot dog’, they call it ‘hot sausage’ as not to confuse that you will get a dog meat in a roll, you will of course get a sausage – in the place like that where practically every meat can be served to you it makes a difference so it is stated in the most correct way :/ 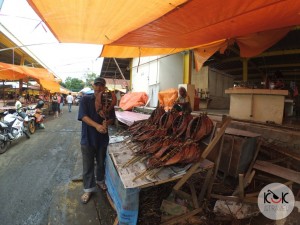 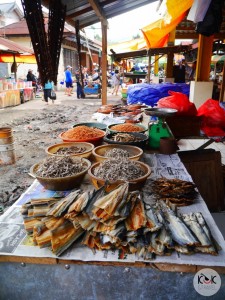 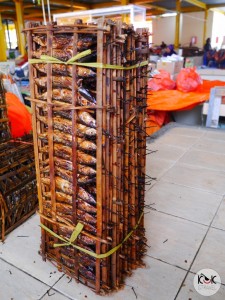 We have a feeling that we will not have a good night tonight, we have never experienced anything so cruel and harrowing at the same time … We believe that among you there are also such people who have mixed feelings about the fact that we are sharing with you this kind of experience. We personally believe that showing reality as it is in the course of our journey is very important, we will not skip or try to omit difficult or taboo subjects, or hide the negative aspects of travel to Asia …: / We think that travelers should have the access to such information and know what to expect before exploring a selected destination.