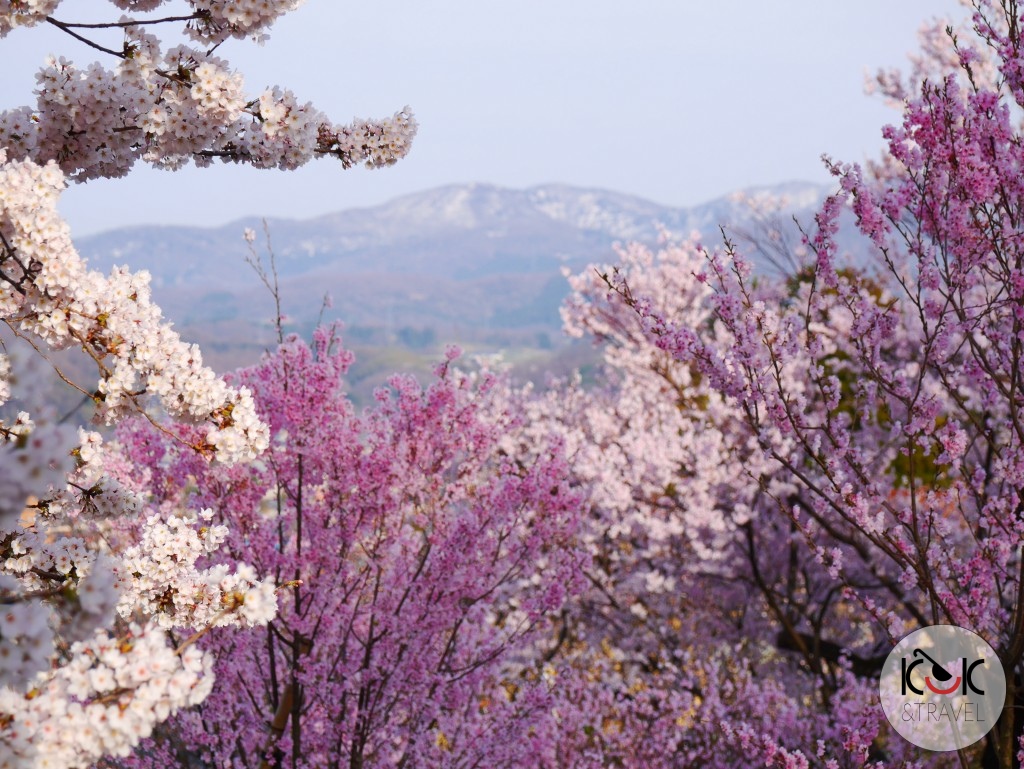 Spending only a week in Japan and being on a really tight schedule, we still wanted to get out of Osaka for a day to get to the Japanese Alps. Have you heard of Kanazawa – a city called “Little Kyoto”? Like Kyoto, Kanazawa avoided bombing during World War II. The city name literally means “golden marsh” – in its peak period it was considered to be the richest region in Japan producing about 180 million kg of rice! In addition to samurai and geisha districts you will also see there many interesting temples, museums and the Omi-cho market resembling a bit Tokyo’s Tsukiji Market. Honestly our aim was to come mostly for the views, yes! – gorgeous views of the mountains from one of the 3 most beautiful gardens in Japan, Kenroku-en. Arriving at this place only for a few hours was definitely worthwhile even though the one-way trip from Osaka to Kanazawa took us 3 hours. Have a look how beautiful the place is 🙂 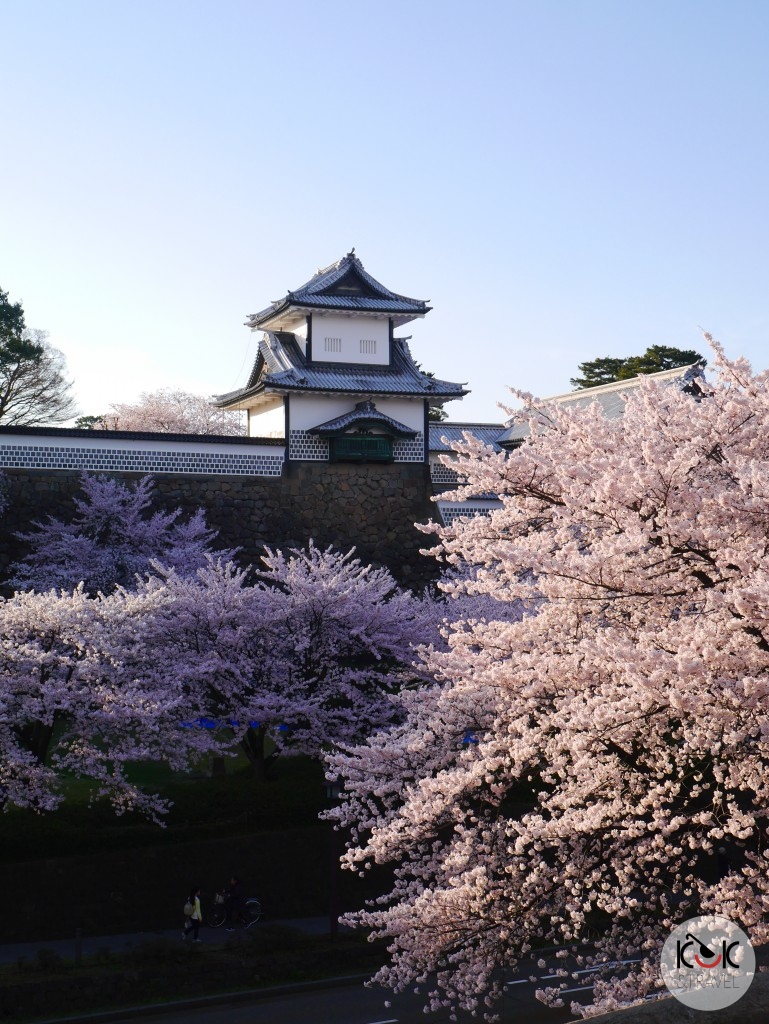 Thinking about visiting some charming town in the Japanese Alps, Kamikochi was the first thing in our minds. Unfortunately the beginning of April is not the best time to go to this place. In one of guidebooks we found some info that Kamikochi is closed (whatever that means) between November 15th and April 22nd, and besides, after checking the weather forecast for early April we fell a bit discouraged to go there (7 degrees during the day, 10 degrees below zero at night – and we we did not have any winter clothes with us during our 6 month trip through Asia ..). We checked the ”scope” of our Japan Rail Pass (a weekly ticket for the majority of transportation in Japan – you need to get that one! More details in a separate post :)) and it turned out that it included, among others, express trains so we could use it to get to Kanazawa from Osaka taking the Express Thunderbird (you will get to Kanazawa in 3 hours from Shin-Osaka station or in 2.5 hours from Kyoto). Then after we got off at JR Kanazawa Station, we set up our maps.me application to guide us to Kenroku-en, an amazing 17th-century garden near the Kanazawa castle. It is about 2.5km from the station, so we had a really nice stroll through picturesque alleyways until we finally got there (on the way we were able to already see the mountains in the distance), and blossoming cherry trees set us a path in that direction 🙂 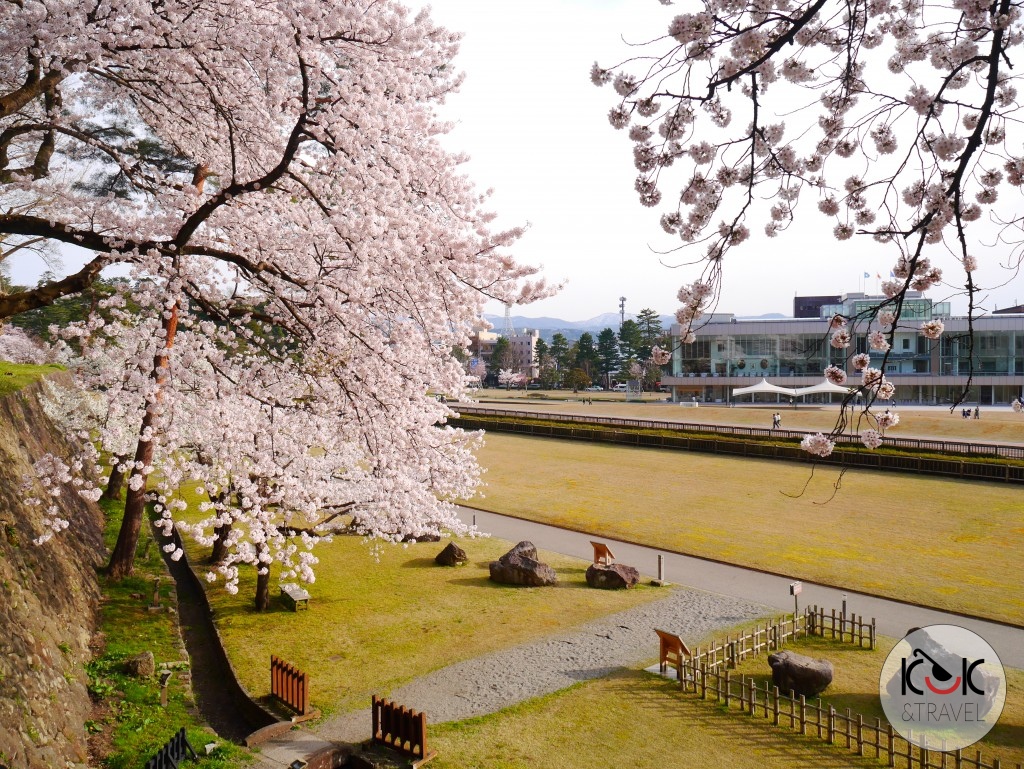 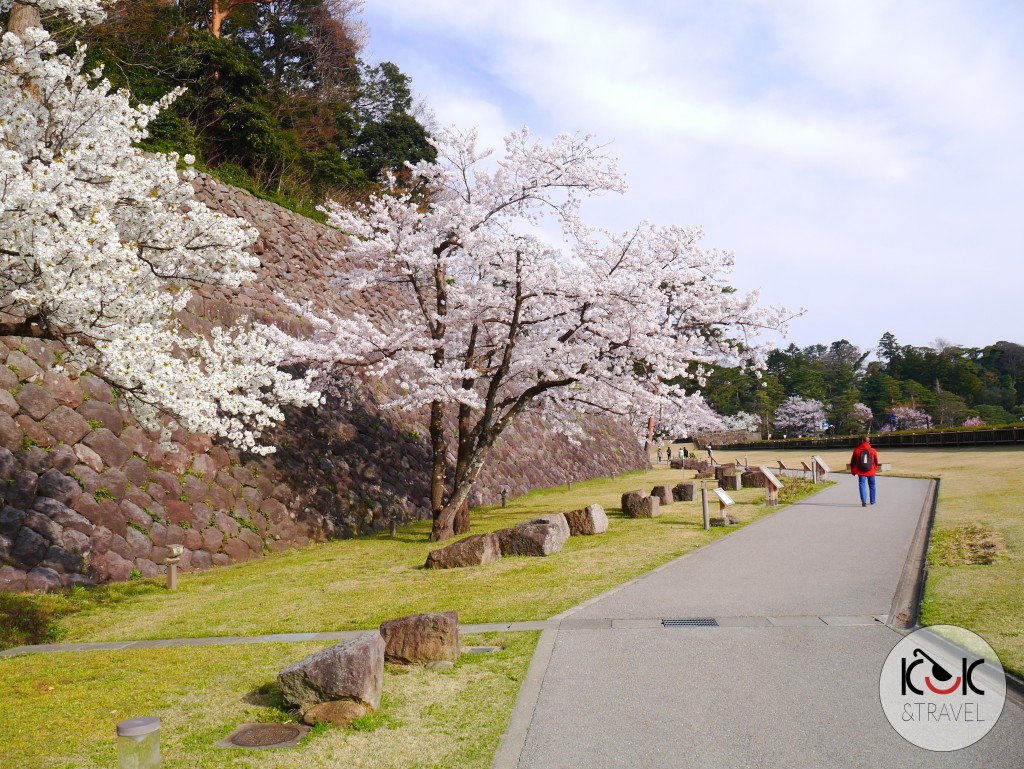 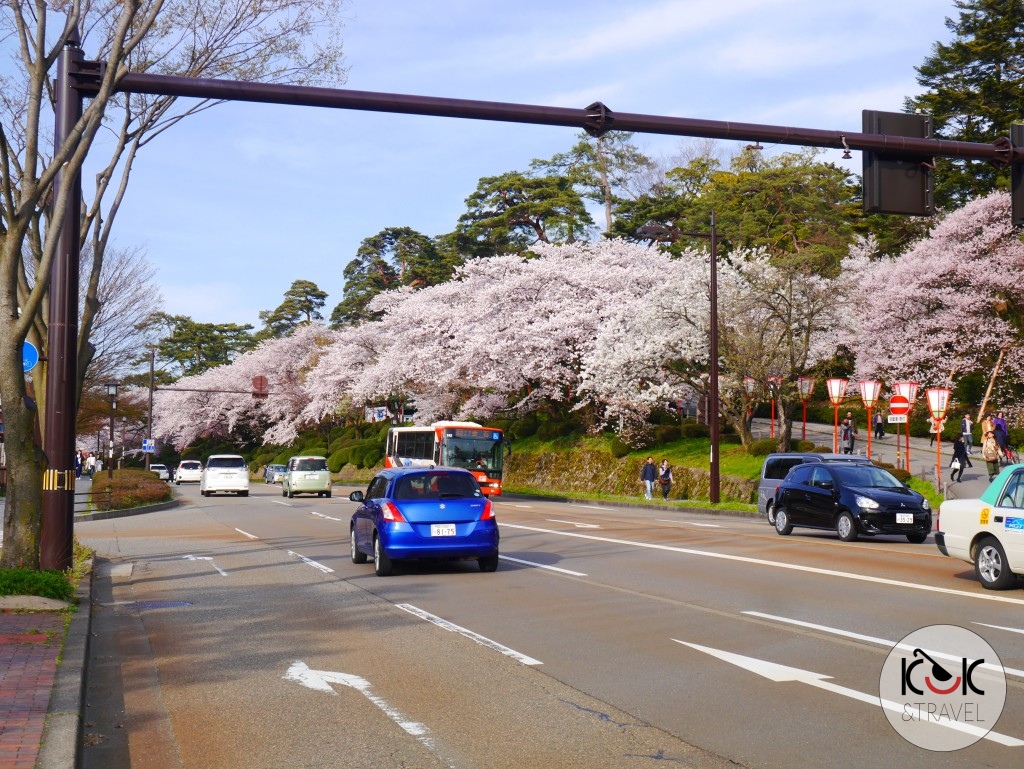 Kenroku-en garden is open from 7am to 6pm between March and 15th October, and from 8am to 4:30pm during the period: 16th October till February. The garden’s name ‘kenroku’ means: ” six combined ” and derives from the famous Chinese Sung dynasty gardens, which distinguished 6 attributes of perfection: seclusion, spaciousness, artificiality, antiquity, water abundance and broader views. The garden was first made open to public in 1871. We weren’t charged for the entrance fee, which was supposed to be 310 yen / less than 3EUR (children: less than 1EUR). 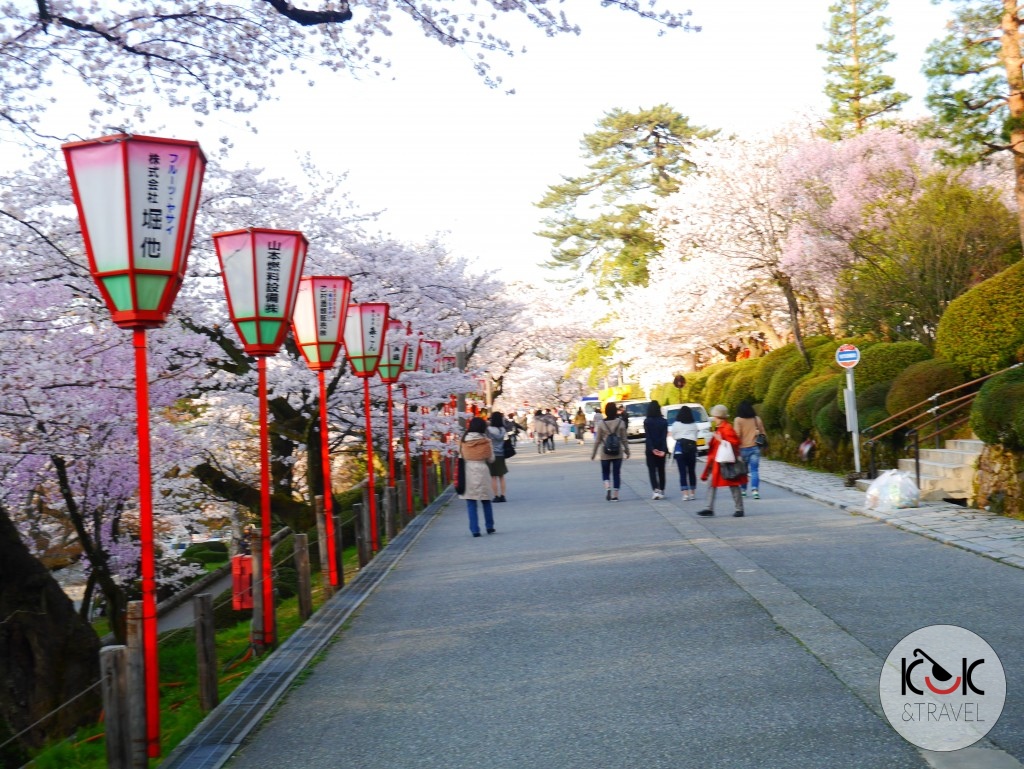 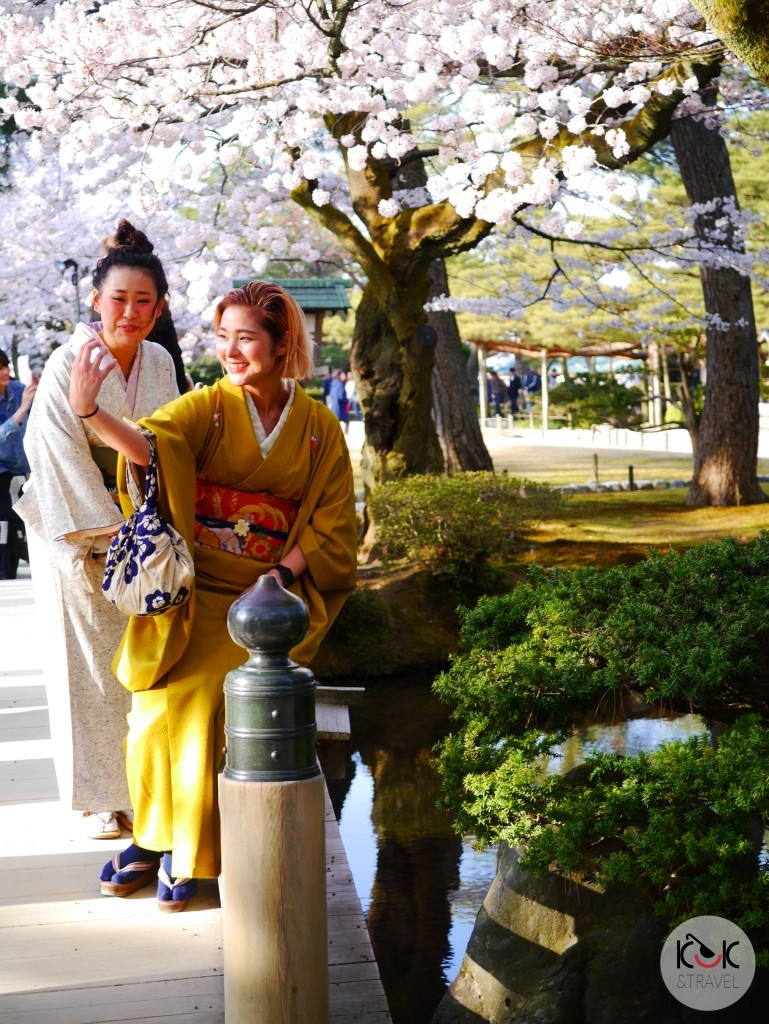 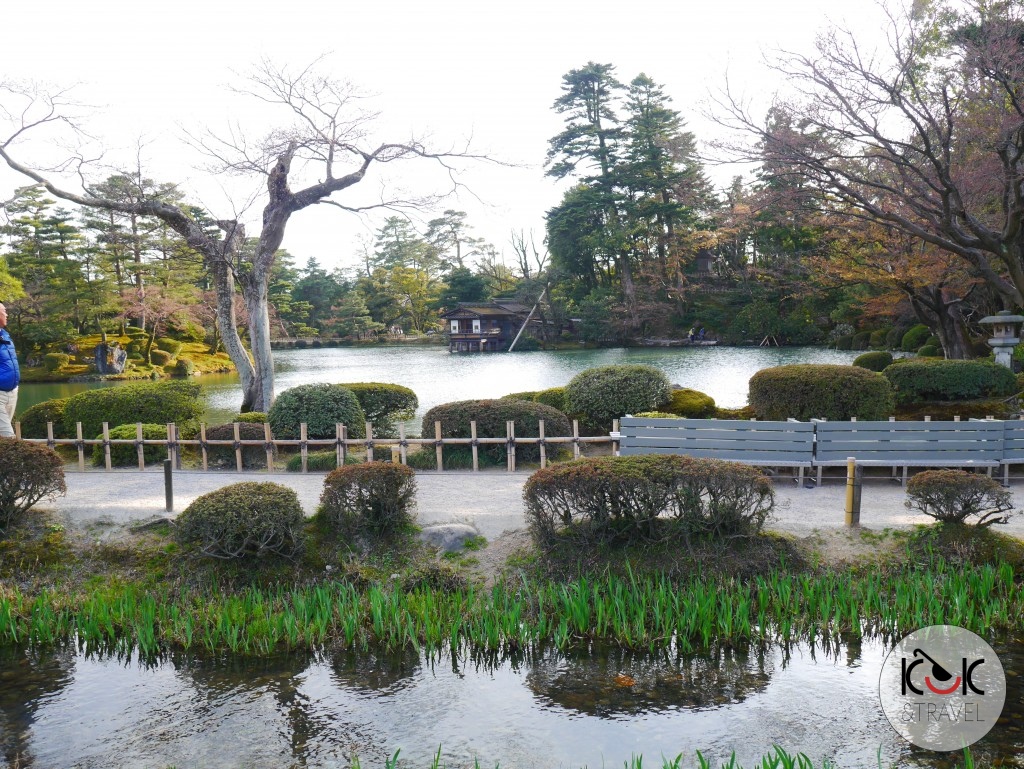 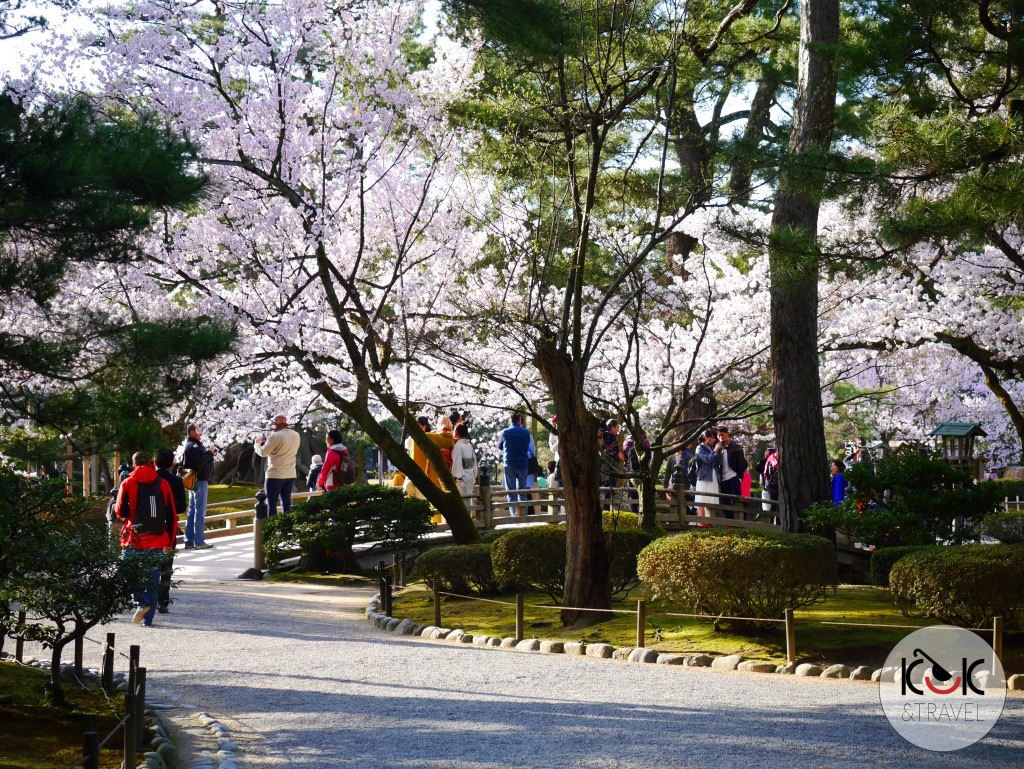 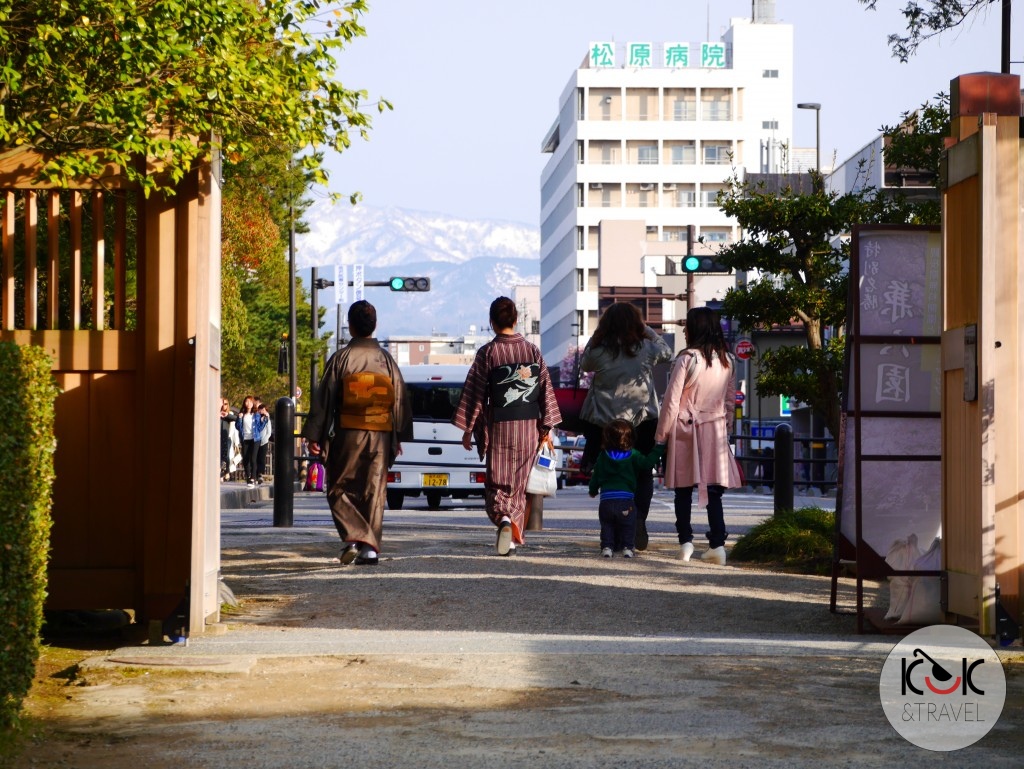 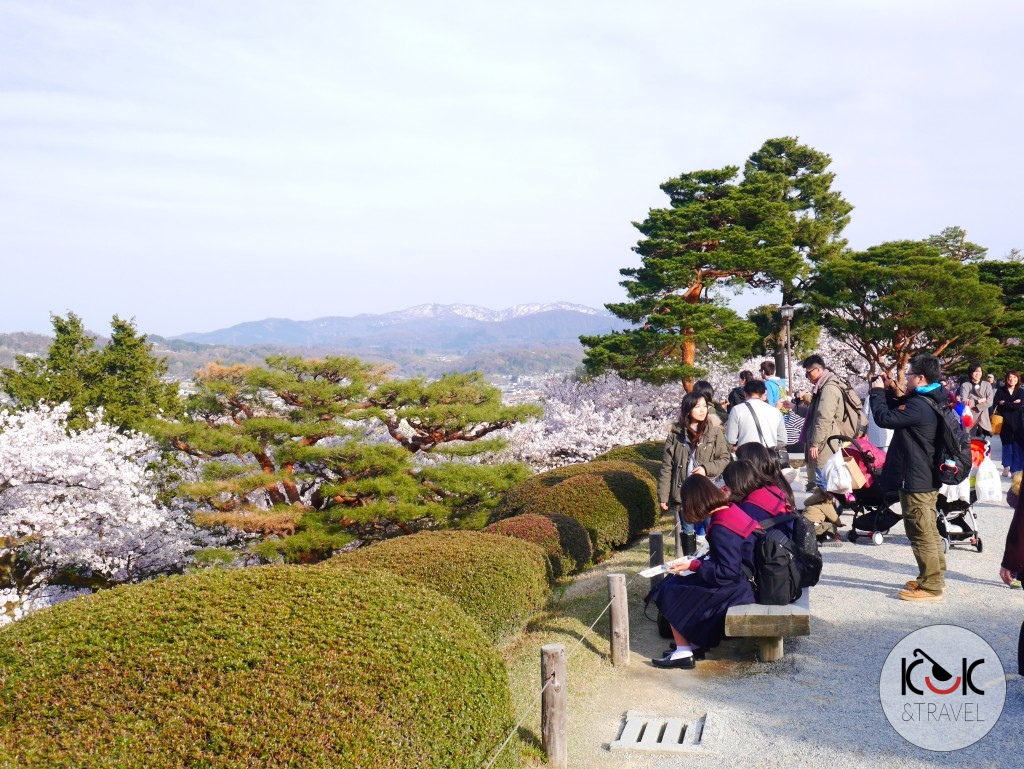 From the garden we could admire the beautiful Japan Alps, which together with the blossoming cherry trees, were hypnotizing every visitor coming to the park. The sky was ideally clear on that day, we were lucky. 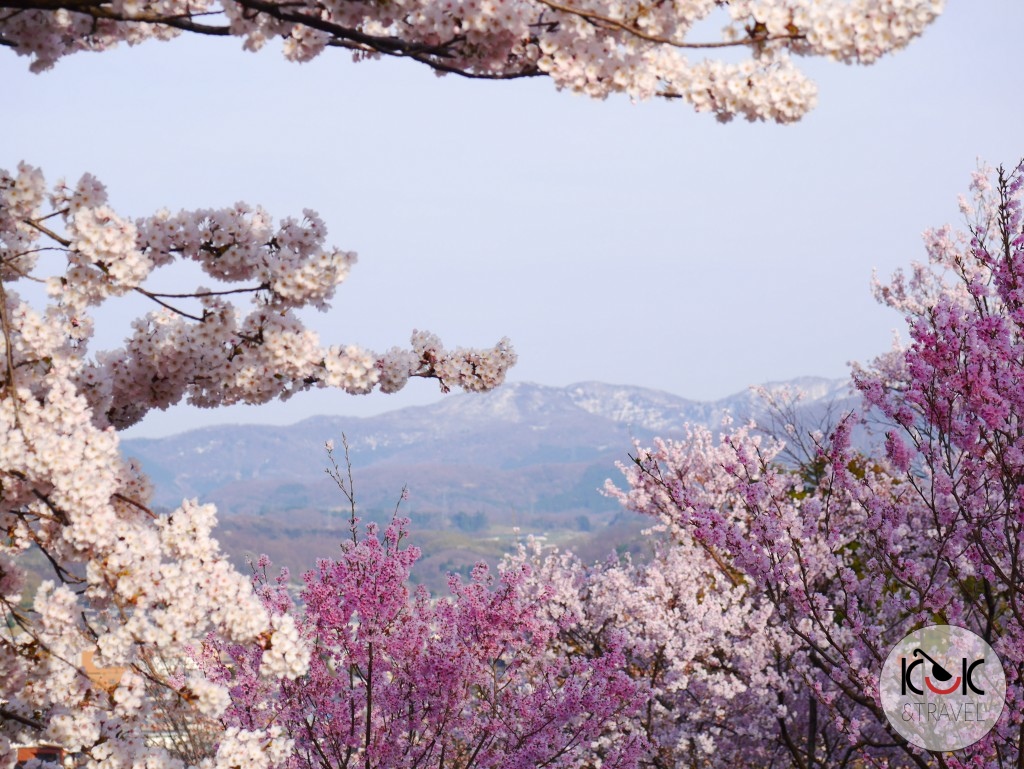 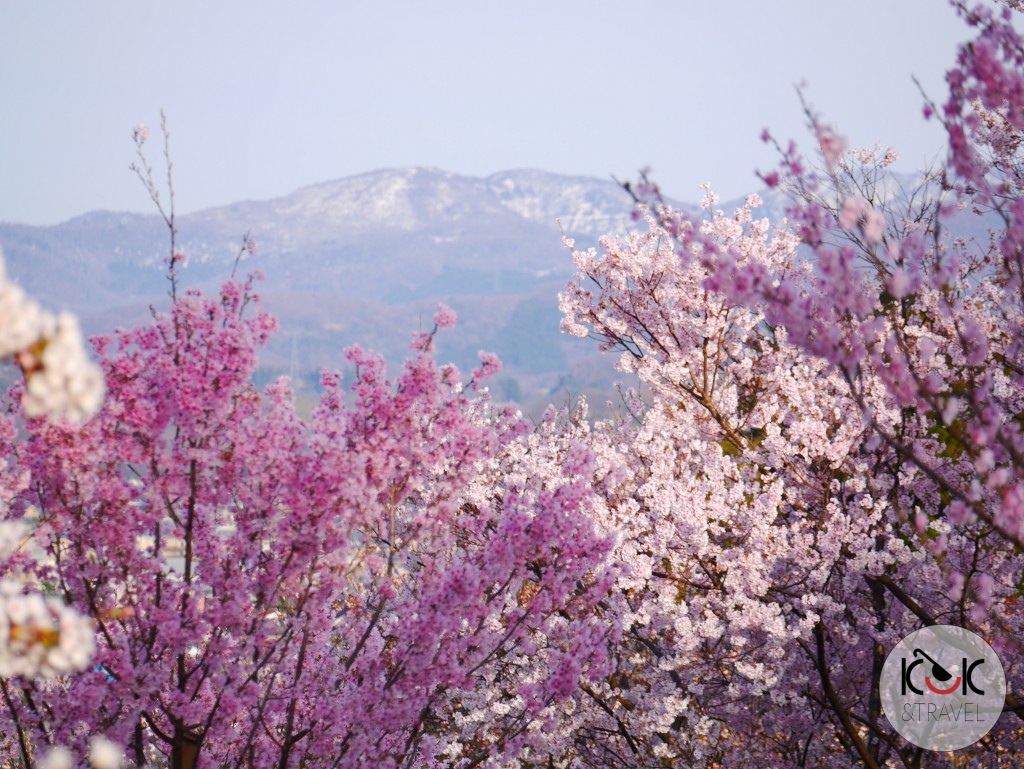 Going in the direction of the castle you can visit Kanazawa Castle Park (admission fee: 310yen), which is open to visitors from March to October from 5 am! The castle was built in 1580 and 4 generations of a so called Maeda clan lived in it. In 1881 it was destroyed by fire. The elegant Ishikawa-mon gate visible from Kenroku-en garden survived the fire. We did not go to the castle (make sure that a particular Japanese castle that you want to visit is well worth it, because most of them have nothing interesting inside, only modern wooden beams and empty chambers e.g. the famous Himeji castle) as the view from the garden was everything we wanted while being on a such short city break 🙂 : 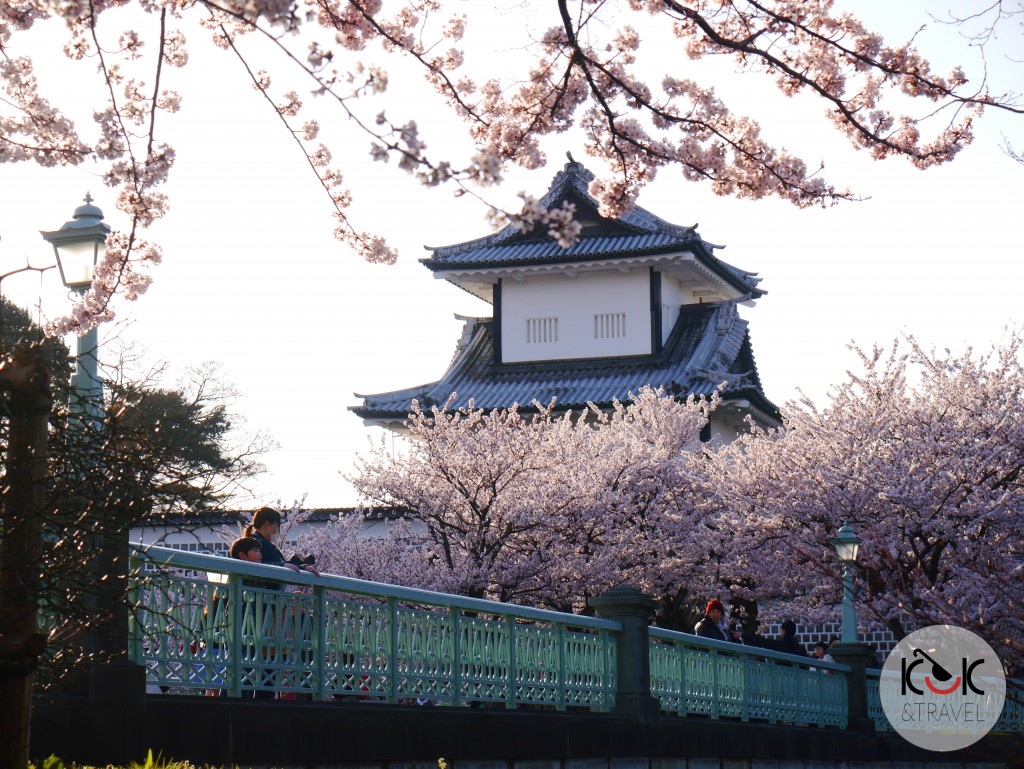 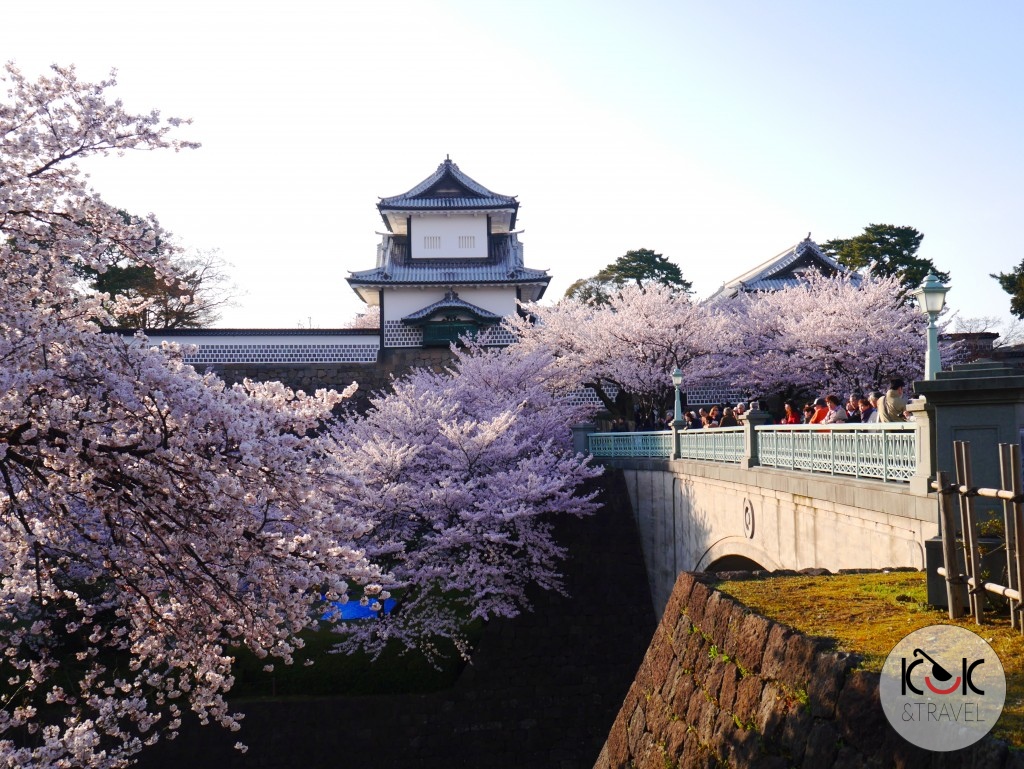 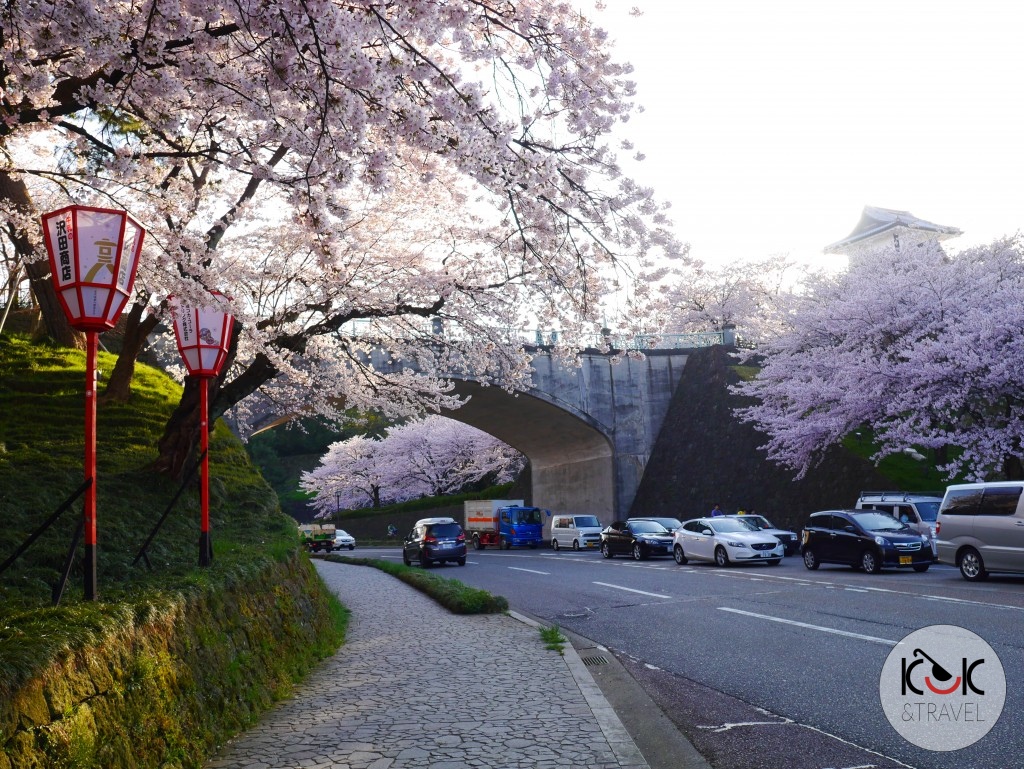 Unfortunately after having a picnic in the park we had to go back to Osaka by train to get up early on the next day and move on exploring Japan:)

2 Replies to “Kanazawa – the pearl of Japan Alps”